According to the Bureau of Labor and Statistics (BLS): “Employment of atmospheric scientists is projected to grow 9 percent from 2014 to 2024, faster than the average for all occupations. The best job prospects for atmospheric scientists will be in private industry.”-- http://www.bls.gov/ooh/life-physical-and-social-science/atmospheric-scientists-including-meteorologists.htm.

The average salary for meteorologists in Georgia outpaces the nationwide average by 9% (link). Local and regional employers like Delta Airlines, Southern Company, Panasonic, and Coca Cola employ meteorologists and atmospheric scientists. The private sector represents an area of significant growth in this field and the state of Georgia will need to keep pace. From 2002-2012, the annual number of new B.S. degree recipients in atmospheric sciences grew 40% according to the U.S. Department of Education, in line with a 44% growth in jobs in the field over the same period according to the BLS. As BLS notes, there is significant growth opportunity in the private sector (airlines, consulting, reinsurance, air quality, agriculture, media, digital media, etc.). Additionally, because it is recommended that our students also attain the Geography degree, our students are trained with broad skills in Geographic Information Systems (GIS) and social sciences. The Association of American Geographers (AAG) recently reported that median salaries and job growth for geography continue to outpace the average in other disciplines.

Though a small (but visible) part of the job market in meteorology, the broadcast sector is changing rapidly. The UGA Atmospheric Sciences Program faculty met with the CEO and senior executives at the Weather Channel. They overwhelmingly stated that the emerging market in broadcast is digital meteorology and that future meteorologists will require atmospheric sciences that they have seen in the current group of UGA graduates and interns now at The Weather Channel, which is based in Georgia. Similar needs have been expressed by CNN as well as local television stations. Recent partnerships with The Weather Channel, the Atmospheric Sciences Program, and the Grady College of Journalism are addressing the looming challenges, but meteorology students must be equipped with the proper degree credentials to avoid perception issues with a Certificate.

In the federal sector, the National Weather Service (NWS)’s Weather Ready Nation is “building community resilience in the face of increasing vulnerability to extreme weather and water events.” (link). NWS managers are increasingly asking for a new generation of atmospheric scientists versed in meteorology, GIS, social sciences, and communication. Our program has also experienced increased interest from the U.S. Forest Service (Athens), Department of Energy (Augusta), and FEMA (Atlanta). Such agencies have emerging needs for broadly trained atmospheric scientists or meteorologists with cross-disciplinary perspectives. 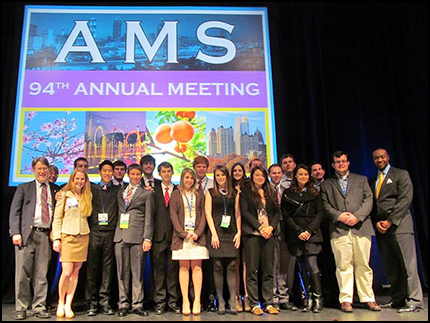